"I have always been the under dog wrapped up in a little blonde package with a sometimes overwhelming sense of imagination. In a lot of ways, I'm still that little girl scared of the dark."
—J.C. STOCKLI


Sometimes I read a book just for fun. Other times I read a book and study it. J.C. Stockli is one of those writers who actually had me taking notes. Her style is crisp and smart, and her most recent novel, The Nothingness, is a gritty paranormal mystery that grabs you by the jugular and doesn't let go.

Stockli's work was so intriguing that I messaged her and asked if I could interview her. She eagerly agreed, much to my delight!

C.W.: Your book is very dark with some frightening imagery and ideas. I've gotta to ask, what were you like as a child?

J.C. *Laughing* I was a pretty normal kid, the younger of two siblings, two parents, a dog and cat. I had a wonderfully playful grandmother, a real quirky aunt, and some rascally cousins whom I loved to visit with when growing up. There was a lot of make-believe in my childhood. Yes, I had an imaginary friend and I'm still terrified of the boiler monster in my basement. I always had nightmares, but forced myself to get into horror movies to get over my fears. I had a neighbor who was obsessed with the Poltergeist franchise, and I'm sure she helped to foster my fears, but I learned to love them. I have always been the under dog wrapped up in a little blonde package with a sometimes overwhelming sense of imagination. In a lot of ways, I'm still that little girl scared of the dark.

Your book delves into some truly harrowing realities about the lives of addicts. Your depictions of their struggles are very real and heart-breaking. What sort of experiences have you had, or what research did you do, to capture all of that so vividly?

Understanding that I looooooove when endorphins flare, I know I have an addictive personality. If it feels good—I want more—period. To that end, I have never ventured beyond tobacco and alcohol because I've just never trusted myself. Sadly, I've seen others around me fall to much harsher substances. Addiction is non-discriminatory. It cripples even the strongest and wealthiest, and it can be a subtle threat. I think that's why I wanted to weave that into my story. What originally started off as a mere fantasy in my mind transformed into a fictitious platform with which I could depict how easy addiction can be. There's a stigma wrongly placed on substance abuse, and I wanted to address that.

Give us some insight into your main character, Evie. What should would-be readers know about her?

Evie is your everyday girl. She's flawed, makes mistakes, but is in fact human and has a good heart. I didn't want her to be pristine. She's insecure, doesn't realize her own worth. I've had a few reviews where people have questioned why she would have been dumb enough to do action A or B, but in reality isn't that the human condition? Don’t we always question why people do some of the things they do? Evie is just like you and me, trying to figure life out.

The Nothingness is the first book in a series you're planning correct?

Yes, the Addictions of the Eternal series.

So what sorts of places do you see Evie going to in the future—emotional, mental places? 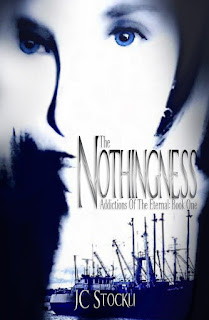 Evie is going to run the gauntlet with her addictions. The Nothingness is only her first exposure to the drug. She's going to have others who try to shield her from it, but she's got to taste it (so to speak), experience the high for herself, succumb to it, and hopefully free herself from it. The series will carry her through the highs and lows of addiction and through said journey we'll all slowly exit reality and become immersed within the fantasy of the vampire world lurking in the shadows.

Vampires are definitely the rage these days. What drew you to write about them?

I have loved vampires since I was a kid. Who didn't love The Lost Boys? Honestly, the fact that they have become all the rage is sort of surreal for those of us who have been mystified by the supernatural our entire lives. Am I right?

So true! I've got to ask, are you a Twilight fan?

*Laughter* I read and enjoyed the books for the YA value they offer. They challenged the convention of what vampires could be, which I enjoyed... but they were too soft for me, as most YA tends to be.

Ok. We can be friends. *Laughter* So what made you decide to depict your vampires in such a gritty, realistic way?

I didn’t want superhuman powers or the traditional convention of what a vampire could be. I’ve seen other authors tackle this subject, and some challenge the norm, while others embrace it, masterfully—I wanted to challenge it. I have this firm belief that all legend must stem from somewhere. That said, the concept of a tangible origin suggested a more realistic existence than the aversion to sunlight or flying bats with no reflection. I'm not saying that I do not value the cross and garlic stuff, but that’s not real life... unless we’re going to talk about the medical conditions behind it all. I decided I wanted to stray away from tackling the scientific angle, that's been done quite well already, but what about the sociological evolution? Or perhaps the spiritual origin? We’ll see this exposed as the series progresses.

I really liked your approach to vampires in The Nothingness. I think in recent years my taste for vampire stuff has been tainted by their treatment in Hollywood and in books like Twilight, but I felt like you breathed new life into the genre for me. I can't wait to read what you come up with next!

Your prose has such a distinct style. It's very beautiful. Tell us about your writing process. What does it look like? How do you best like to work? Do you have any weird quirks?

This story stemmed from a nightmare that lingered. When an image is so vivid that I can live and breathe it, then it's easy to tell it. I take every experience from my day to day and make mental notes. What was that smell? What did it stir in me? I love silent exchanges of eye contact, so each time I find myself envisioning Lucca staring across the room, I try to tune it to how my body reacts. Music is a large influence, again monitoring how my body reacts to a rhythmic beat. I cannot write in silence, I need to choreograph the scene to the song. Actual writing is haphazard for me. If I have an idea, I get it out quick. I email notes to myself constantly, sometimes a full scene or dialogue. I email notes to myself throughout the day and jumble it all together when I get home and in front of the computer.

What does J.C. Stockli like to do when she's not writing?

Well, it sure isn't folding laundry! I have a beautiful family to keep me company, and thanks to e-books, I have a virtual library in the palm of my hand at all times.

What sorts of things have you learned about yourself while writing?

I’ve learned to push myself out of my comfort zone. Every writer is an introvert, and sharing is difficult. Especially being an indie author, I’ve had to suck in a deep breath and put myself out there, put my writing out there. This was a huge leap for me, but now I feel freer, liberated. It’s been a cathartic experience.

What books are you reading right now?

I just finished a fantastic adventure, Mabel Bunt And The Masked Monarchs, and I’m currently reading My Hood Your Barrio His Beat. I love meeting fellow indies and experiencing their work, working with them and doing book reviews and character interviews on my blog www.jcstockli.com. Writers can contact me if they want me to feature their work.

You're awesome! Thanks so much for entertaining my questions.

J.C. Stockli is scheduled to be part of the first ever Virtual FantasyCon, which runs November 1 to 8. Presented by Flavour of Fantasy, FantasyCon will be held online in a Facebook Event with panel discussions via YouTube, a Scavenger Hunt, Giveaways, and a Cosplayer Costume Contest with a daily prize for the best selfie and costume and a grand prize.

To learn more about J.C. Stockli's work, visit her blog at www.jcstockli.com.